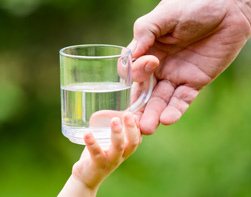 Microbiological analysis is very important in monitoring the quality of water.

At Advanced Laboratory Testing, we offer a comprehensive range of INAB accredited Microbiology Test Methods (MTM) for the analysis of water, such as:

MTM024 ENUMERATION OF COLONY COUNT IN WATER
The most useful application of the estimation of bacteria populations is the detection of significant changes in trends of the bacterial content of waters. Bacteria counts at 37 °C are useful to assess the quality of relatively unpolluted groundwater and can provide an early indication of more serious pollution.

MTM025 ENUMERATION AND CONFIRMATION OF COLIFORMS AND E. COLI IN WATER
Tests for coliform bacteria and Escherichia coli (E. coli) are the most important routine microbiological examinations carried out on drinking water. These tests provide a sensitive means for detecting faecal contamination, for assessing raw water quality, the effectiveness of water treatment and disinfection, and for monitoring water quality in distribution.

MTM026 ENUMERATION AND CONFIRMATION OF PSEUDOMONAS AERUGINOSA IN WATER
Pseudomonas aeruginosa are environmental bacteria commonly found in soil and on plants. The organisms are able to grow in waters containing very low levels of nutrients and should be absent in all drinking waters. The organisms are frequently present, in small numbers, in the normal intestinal flora of humans and animals but should not be used as an indicator of faecal pollution.

MTM027 ENUMERATION AND CONFIRMATION OF ENTEROCOCCI IN WATER
Enterococci are regarded as secondary indicators of faecal pollution, and the main use of the test for enterococci is to assess the significance of coliform bacteria in a sample in the absence of Escherichia coli (E. coli). Occasionally, identification of the species of enterococci or streptococci in a sample may help to distinguish between human and animal pollution.

MTM028 ENUMERATION AND CONFIRMATION OF CLOSTRIDIUM PERFRINGENS IN WATER
Tests for Clostridium perfringens play only a subsidiary role in water examination. The organisms form spores which are resistant to environmental stress and can persist in the environment for some time. Clostridium perfringens is associated with faecal contamination. If found at a time when other faecal indicator organisms are no longer detectable, the organism may indicate remote or intermittent pollution.

Advanced Laboratory Testing is INAB accredited to perform the above Microbiology Test Methods in the following water sample matrices:

Upon receiving your Test Certificate from us, our Technical Team are always available to share their expertise in helping you understand and interpret your results. 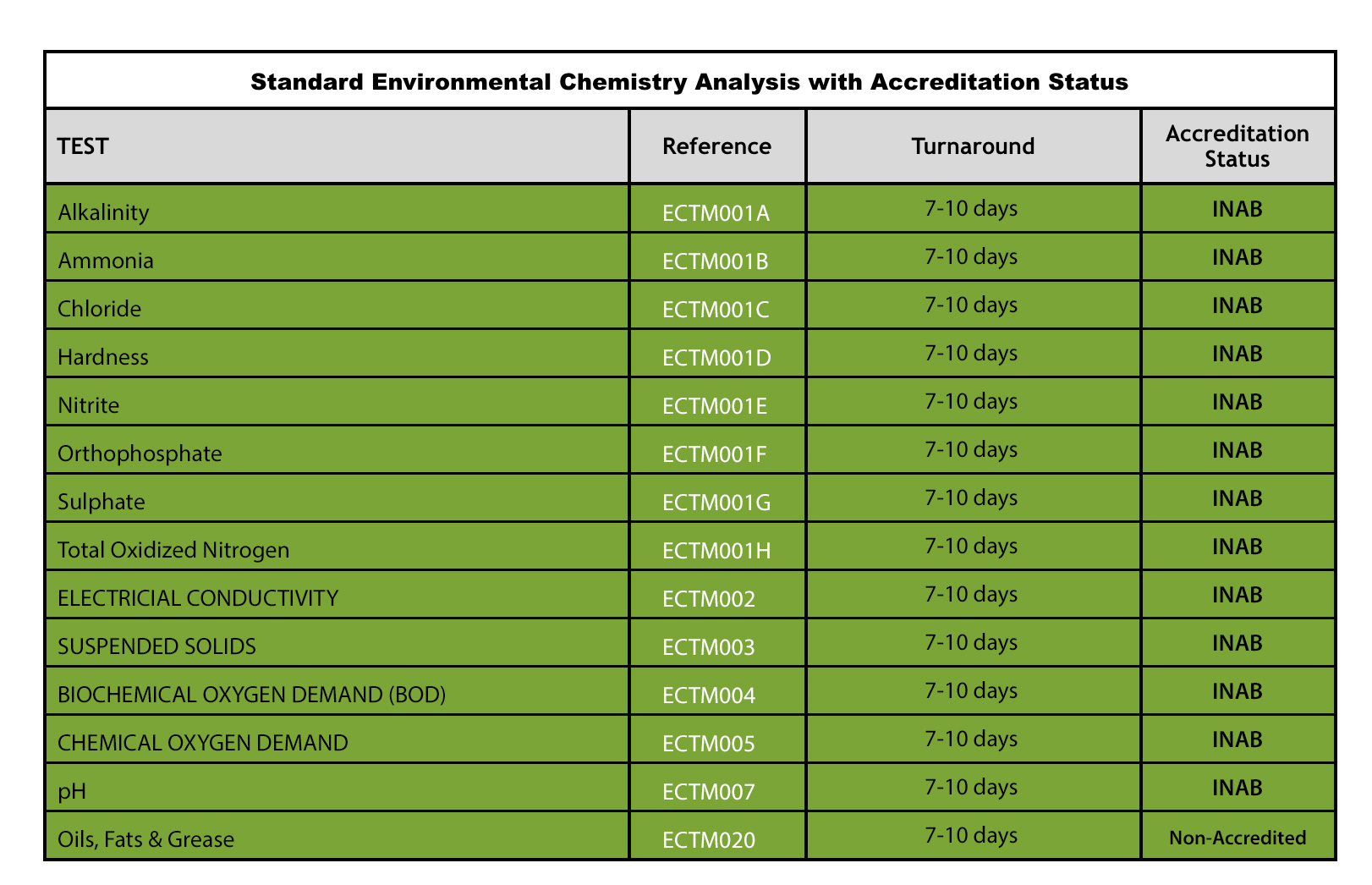 pH
pH is a measure of the intensity of the acidity/alkalinity of water on a scale of 0-14 with 7 being neutral. Low pH results may lead to corrosion of metal pipes and surfaces and a green/blue off colour on ceramic tiles and sinks.

Total Hardness
Hard water is water that has high minerals content (in contrast with “soft water”). Hard water is generally not harmful to one’s health.

Problems occur where the water is too hard and deposits on pipes leaving a white lime scale. This can build up over time leading to appliances burning out and pipes being blocked.

Nitrite/ Nitrates/ Ammonia
Nitrates/ Nitrites /Ammonia are found in nature from many sources, primarily from fertilisers and effluents. For Nitrates where a child is taking water with levels above 50 mg/l for a prolonged period of time a condition known as ‘Blue baby syndrome’ may occur where the child is unable to carry enough blood around its body.

Iron
Iron is a metal widely found in rocks and soils. Water with iron may look clear at first, however upon exposure to air the iron is oxidized to form orange/red insoluble particles. Iron stains plumbing fixtures and laundry a light red/ brown colour and causes undesirable tastes.

Manganese
Manganese is a metal widely found in rocks and soils. At levels exceeding 150 ug/l manganese stains plumbing fixtures and laundry a dark brown colour and causes undesirable tastes. Its presence in water may lead to microbial growths in the pipe system. Manganese is essentially nontoxic at levels normally found and only causes health problems at levels where there is a very undesirable taste.

Chlorides
They are usually associated with the salt content and the amount of dissolved minerals in water.

The recommended limit for chlorides is 250 milligrams per litres (mg/1).

This legislation defines “water intended for human consumption” as:

• all water, whether in its original state or after treatment, intended for drinking, cooking, food preparation or other domestic type purposes, regardless of its origin and whether it is supplied from a distribution network, from a private source or by tanker or similar means;
• all water used in any food production undertaking for the manufacture, processing, preservation or marketing of products or substances intended for human consumption, unless the supervisory authority is satisfied that the quality of the water cannot affect the wholesomeness of the foodstuff in its finished form.

other than
• natural mineral waters recognised as such by the responsible authorities, as defined in the European Communities (Natural Mineral Waters, Spring Waters and Other Waters in Bottles or Containers) Regulations 2007 (S.I. No. 225 of 2007),
• water supplied in bottles or containers
• waters which are medicinal products within the meaning of Council Directive 2001/83/EC of 6 November 2001 on the Community code relating to medicinal products for human use
• an exempted supply.

An exempted supply means a supply of water which –
• constitutes an individual supply of less than 10 cubic meters a day on average or serves fewer than 50 persons, and (ii) is not supplied as part of a commercial or public activity, or
• is used exclusively for purposes in respect of which the relevant supervisory authority is satisfied that the quality of the water has not influence, either directly or indirectly, on the health of the consumers concerned.

S.I. 122 of 2014 prescribes the quality standards to be applied, and related supervision and enforcement procedures in relation to supplies of drinking water, including requirements as to sampling frequency, methods of analysis, the provision of information to consumers and related matters.

The Environmental Protection Agency prepares and publishes annual reports on the results of the monitoring programmes carried out.

In EU food law, where there is a reference to potable water, it is usually defined as water which meets the standards of this Directive.

Where the water quality does not meet the specified standards, remedial measures are outlined in S.I. No.122 of 2014 for public and private water supplies.